Showing posts from September 5, 2010
Show all

The O'Neill store at Anaheim GardenWalk is having a storewide sale tomorrow to benefit the Twin Towers Orphan Fund. 40 - 70% clothing, footwear and accessories, 20% off surfboards, wetsuits, sunglasses and skateboards.
Read more

The L.A. Derby Dolls are Southern California's premiere all-female, banked track roller derby league. Founded in October 2003 by Rebecca Ninburg (a.k.a.Demolicious) and Wendy Templeton (a.k.a. Thora Zeen), the L.A. Derby Dolls are a league of more than 150 skaters and volunteers, divided into five  teams  who skate on a banked track. Embodying the do-it-yourself ethos of modern roller derby, as resurrected in Austin, Texas in 2000, the L.A. Derby Dolls are an entirely volunteer-run organization, relying on the support of their fans and community. The L.A. Derby Dolls take all the thrills of the old game and update it with a fresh and feisty new face. And the hits and spills are 100% real. No script can write this kind of action. For more information go to http://derbydolls.com/la/ http://tinyurl.com/258jtkh Pls RT!
Read more

Click here for tickets and more information! Due to unforeseen circumstances, MUNCH LA regretfully has to cancel its event on Saturday, September 18th, 2010. MUNCH LA deeply apologizes to our supporters for any inconveniences and we hope to reschedule our event soon. In the meantime, full refunds on tickets will be available. Please let us know if you have any questions and we will keep you posted.
Read more

Sept 13: Cheer your Anaheim Ducks in a sushi rolling contest!

3 course menu is back at TGI Fridays!

Three cheers! One for each course! Yes, the 3 Course Menu is back at TGI Friday's and it's just $12.99. Check it out!
Read more

Endless Shrimp at Red Lobster is Back!

It’s Endless Shrimp at Red Lobster! Pick two of your favorite shrimp preparations. When you’re ready, we’ll bring more.  16.99 All entrées come with choice of salad and unlimited Cheddar Bay Biscuits™. This special offer is available for dine-in guests only. For more information (or find a location near you) click here
Read more

Hollywood forever cemetery: 6000 Santa Monica Boulevard at gower [map] september 11th : bedazzled   Directed by Stanley Donen (1967 94 mins) Gates 6:30 pm Movie 8:00 pm No reservation necessary $10 donation tickets available at gate As a courtesy to other moviegoers: NO TALL CHAIRS!! Stylish, playful, and outrageously funny, Bedazzled is a 60s mod gem. A 'Swinging London' take on the Faust story, it stars the incomparable comedy team of Dudley Moore and Peter Cook. Moore has a crush on a waitress at his work and when he meets the devil, played by Cook, he signs his soul over for seven chances to try and seduce her. He is transformed into an intellectual, a rich playboy, a rock star and more as he tries to romance his way into her heart. Raquel Welch co-stars as one of the seven deadly sins, (you can guess which one),and Cook's turn as a rock star is one of the funniest mod moments in cinema! From the director of Singing in the Rain and Charade http://tinyurl.co
Read more

OCFrugalFinder is getting a real domain!

September 07, 2010
Great news!  In a few days you won't have to memorize this long blog address. Shortly, you'll just key in a new url: http://www.ocfrugalfinder.com/ .  I'm still working out the kinks, so meanwhile bookmark this site, and eventually you'll be redirected to my new site. Thank you to my followers, and please tweet me ideas at www.twitter.com/ocfrugalfinder (@ocfrugalfinder). Having fun and eating doesn't have to cost a lot of money, and I'm here to spread the frugal findings!
Read more 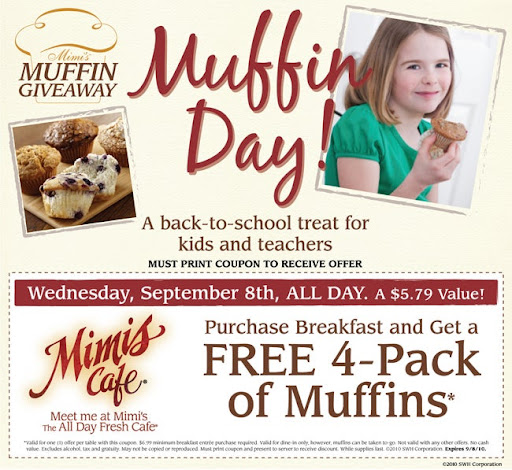 Save at Rubios during Labor Day weekend (Sept 4-6)

Buy one, get one free from Rubios.,.. Or save on catering! Valid September 4-6 only!
Read more
More posts