All Old Pasadena Film Festival screenings are free and open to the public. Arrive early for best seating at One Colorado Courtyard and Distant Lands, where chairs are provided. Bring your own chairs and blanket to Central Park screenings.

Take advantage of the warm summer evenings and come out and join the community enjoying a film together. Old Pasadena features more than 100 restaurants all concentrated within 22 historic blocks, so grab a bite before, after, or even during your movie.

One of the most famous documentaries ever created, The Endless Summer tracks the ultimate surfing adventure. Two California surfers travel the globe searching for the perfect wave. Director Bruce Brown’s Endless Summer is so powerful it has become a timeless masterpiece that continues to capture the imagination of new generations.

Winner of four Academy Awards including Best Picture, Best Actress (Diane Keaton), and Best Director, as well as another 24 film awards worldwide, Annie Hall is considered one of Woody Allen’s finest films. The movie tracks the romantic adventures of quirky New York comedian Alvy Singer and his neurotic girlfriend Annie Hall. It ranks #2 on AFI’s list of Top 10 Romantic Comedies, #4 on their list of Top 100 Comedies, and #31 on their list of Top 100 Movies of All Time.

In one of the creepiest films of its generation, The Ring stars Naomi Watts as Rachel Keller a journalist investigating a videotape that may have killed her niece and three other teenagers. Locals tell of a legend that if one views the tape, they will die seven days after watching it. If the legend is correct, Rachel will have to save her son's life and her own by running against time.

Based upon the famous novel by F. Scott Fitzgerald, The Great Gatsby tells the story of Nick Carraway, a young man from the Midwest now living on Long Island who finds himself fascinated by the mysterious past and affluent lifestyle of his neighbor, the wealthy Jay Gatsby (Robert Redford). Soon he is a part of Gatsby's circle, becoming a witness to obsession and tragedy. Also starring Mia Farrow, Bruce Dern, and Karen Black, The Great Gatsby won 2 Oscars, a Golden Globe, and 3 BAFTAs.

Velma Kelly (Catherine Zeta-Jones) is a sexy vaudeville star who murders her husband and sister after finding them in bed together. Roxie (Renee Zellweger) is the wannabe star who murders her lover after finding out he was never going to make her famous. Enter Billy Flynn (played by Richard Gere), the greasy lawyer whose goal is not only to have his clients acquitted, but to make them legal legends. With Matron Mama Morton’s (Queen Latifah) help, both women compete for the spot as Chicago’s most famous murderess. Chicago is a triumph in movie making and has won six Academy Awards.

This timeless horror classic stars Julie Harris, and was nominated for a Golden Globe for Best Picture. Dr. Markway, doing research to prove the existence of ghosts, investigates an eerie mansion with a history of death and insanity. Joining the diverse group who decide to stay in the house with Dr. Markway, is the fragile Eleanor who feels strangely connected to whatever spirits live at Hill House. Soon the ghostly presence in the mansion manifests itself in scary and deadly ways.

While on a trip to Paris with his fiancé's family, Gil, (Owen Wilson), a nostalgic Hollywood screenwriter, finds himself mysteriously going back to the 1920s every evening at midnight. In the process, he meets all the great writers, artists, and musicians of the time including Cole Porter, F. Scott Fitzgerald, Josephine Baker, Ernest Hemingway, and Gertrude Stein. Midnight in Paris is an Academy Award-winning film directed and written by Woody Allen.

Fantastic Mr. Fox is a stop-motion animated fantasy-comedy featuring the voices of George Clooney, Meryl Streep, Bill Murray, and Jason Schwartzman. The film is based upon a popular children’s book written by Roald Dahl, which tells the story of a wily fox who uses his cunning nature to outsmart three feeble-minded farmers in order to steal their chickens. Fantastic Mr. Fox marks the first foray of acclaimed director Wes Anderson into animation.

The President of the United States announces Martians have been spotted circling Earth. Soon the aliens land and a meeting is arranged, but not everything runs smoothly, as the Martians seem to have sadistic plans for Earth. Will somebody find a way to stop them or will all of humanity perish? Directed by Tim Burton, and featuring an all-star cast including Jack Nicholson, Glen Close, Annette Bening, Danny DeVito, Sarah Jessica Parker, Natalie Portman, and Michael J. Fox.

This classic American film noir tells the story of a long suffering mother and her ungrateful daughter. Soon cheating, murder, and chaos ensue in the battle between devotion and betrayal. Mildred Pierce is one of the great cult films of all time, and was nominated for 6 Academy Awards, including a career-catapulting Best Actress win for Joan Crawford as Mildred Pierce.

White Silk Road follows three Australian snowboarders who traveled to Afghanistan to snowboard across new frontiers. In one of the most war-torn countries in the world, they discovered new communities of hospitable people, beautiful landscapes, and some of the best slopes they have ever enjoyed.

In The Bus, filmmaker Damon Ristau explores why and how the VW bus became a worldwide cultural icon. The Bus covers the history of the VW, beginning with its birthplace (post-WWII Germany). We also see the presence of the iconic VW bus at Woodstock and at the heart of the counterculture movement.

A western classic, True Grit follows a drunken, stubborn US. Marshall and a Texas Ranger who try to help a young woman track down her father’s murderer. The film won Best Actor for John Wayne (his only Oscar nod) at both the Academy Awards and the Golden Globes, and his role as Rooster Cogburn is one of AFI’s Top 100 Movie Heroes. This film also features Glen Campbell and Kim Darby.

One of the most beloved film noir classics, Academy Award-winning film The Third Man tells the story of an unemployed fiction novelist, Holly Martins, who arrives in post-war Vienna. He travels there to meet his old friend Harry Lime, who has offered him a job. Soon Martins discovers that Lime has recently died in a peculiar traffic accident. Driven to investigate Lime's death, Martins soon uncovers dark secrets about Lime's life and death. Starring Orson Welles and Joseph Cotton, The Third Man was nominated for 3 Oscars, including Best Director. It is #5 on AFI’s list of Top 10 Mysteries, and is also on their lists of Top 100 Movies of All Time, and Top 100 Thrillers.

In present-day America, Agent Kay (Tommy Lee Jones) is a member of a covert organization that tracks extraterrestrial activity. When Kay finds himself in need of a new partner, he gets a brash NYPD detective, Agent Jay (Will Smith). Armed with cutting edge space-age technology and their razor-sharp wits, Jay and Kay investigate the alien threat. Men in Black was nominated for 3 Academy Awards.

Directed by Mel Brooks and starring Gene Wilder, Peter Boyle, Cloris Leachman, Marty Feldman, Teri Garr, and Madeline Kahn, Young Frankenstein is one of the “scariest” comedies of all time. It tells the story of a young neurosurgeon who inherits a castle from his grandfather, the famous Dr. Victor von Frankenstein. Working in the castle alongside a hunchback Igor, a beautiful lab assistant Inga, and the old housekeeper Frau Blucher, Young Frankenstein believes that the work of his grandfather is useless, until he discovers his grandfather’s book describing human re-animation, which quickly changes his mind. Young Frankenstein was nominated for 2 Academy Awards and 2 Golden Globes, and is #13 on AFI’s list of Top 100 Comedies.

This documentary follows adventurer Jeff Johnson as he retraces the epic 1968 journey of his heroes Yvon Chouinard and Doug Tompkins to Patagonia. During the journey he gets shipwrecked off Easter Island, surfs the longest wave of his life, and prepares himself for an ascent of Cerro Corcovado. Jeff's life changes when he meets up in a rainy hut with Tompkins and Chouinard who, once driven only by a love of surfing and climbing, now value nature above all and have come to Patagonia to help protect it.

In this comedic, sci-fi adventure featuring Woody Allen and Diane Keaton, a clarinet player who also runs a health food store, is frozen and brought back to life in the future by anti-government radicals who want him to assist them in overthrowing an oppressive government. Written and directed by Woody Allen, Sleeper is one of AFI’s Top 100 Comedies.

Arrogant and egotistical TV weatherman/broadcaster, Phil Connors, is annoyed when he's assigned the job of covering the annual groundhog festivities in a small town named Punxsutawney; making this his fourth in a row. When he awakens the next day he discovers that it's Groundhog Day again, and again, and again. First he uses this to his advantage, but he soon realizes that he is doomed to spend the rest of his life here, seeing the same people do the same thing every day! Starring Bill Murray and Andie MacDowell. Groundhog Day is one of AFI’s Top 10 Fantasy Films, and Top 100 Comedies.

Directed by Charles Laughton and featuring an all-star cast, including Robert Mitchum, Shelley Winters, and Lillian Gish, The Night of the Hunter is a classic thriller film based on the 1953 novel of the same name. The film tracks Harry Powell, a horrible man who uses his charm to marry an unsuspecting widow. His intensions are solely to steal her fortune hidden by the woman’s deceased husband. The film is based upon the true story of Harry Powers, found guilty in 1932 for the murders of two widows and three children in West Virginia. The Night of the Hunter is one of AFI’s Top 100 Thrillers, and Mitchum’s character, Reverend Powell, is one of their Top 100 Villains of All Time.

Philippe’s to Host Seventh Annual Free Chili Day Posted on  01/03/2017 Every January since 2011, Philippe’s has been teaming up with Dolores Chili to offer patrons a little something free. It’s become more and more popular and the day many have waited for is finally here, Philippe’s will host the seventh annual Free Chili Day. The first 500 customers at Philippe’s on Tuesday, Jan. 24 beginning at 10:30 a.m. will receive a voucher for a free cup of Dolores chili, with the purchase of a sandwich. Guests will receive a voucher at one of the two main entrances upon arriving to the restaurant. They can then use that at the counter to get a free cup of chili, with or without beans, and topped with shredded cheddar cheese, or onions. Dolores Chili and Philippe’s have a relationship built upon time. The 1970’s is where it all began and Dolores Chili is still sold exclusively at Philippe’s. Both establishments have plenty in common being family-owned and operate in Los Angeles. Dolo
Read more 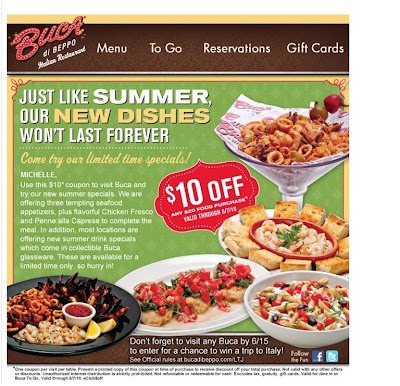 Sign up for the Buca Di Beppo eClub and get great discounts! This month's coupon is $10 off when you spend at least $20 (Offer expires 6/7/10). Heck, One dish alone is about $20, so spending the money is the easy part. Here's a great tip to use the coupon: Go at lunch. Most Buca's are open at lunch, and the prices are half of the dinner cost. True, the portions are smaller, but at least 2 people can eat for $20-$25, rather than 1 entree costing $19.99. If you can, print the coupon I attached. If it doesn't work, well, sign up for the eClub ! You'll get a free appetizer just for doing so!
Read more